Trump and his administration's use of fake news.

As you may already have witnessed, one of the biggest users and creators of fake news is Donald Trump. Just recently, he claimed to have invented the term ‘fake news’, which is fake news in of itself. Or, after many different American agencies conducted investigations on whether there was Russian-American collusion during the elections, he repeatedly denied there was any. Later on however, it was revealed that Donald Trump’s son, Donald Jr. held a meeting with several Russian officials and representatives. The investigation lasted a long time, and with every new piece of information on the meeting, the name of another Russian official was uncovered by the media (Rubin, 2017). Trump and his son however are not the only ones in the administration to use fake news to their advantage.
After Trump’s inauguration, Sean Spicer, the press secretary claimed that the crowd at the event was the biggest presidential inauguration crowd ever. This was found to be far from the truth. When Donald Trump’s senior adviser Kellyanne Conway was pressed to say why Sean Spicer stated that falsehood in an interview with NBC’s host Chuck Todd, the answer was not satisfactory in the least: “You’re saying it’s a falsehood. And they’re giving – Sean Spicer, our press secretary – gave alternative facts.” To this, the host responded “Alternative facts aren’t facts. They are falsehoods.” After Conway tried to move the discussion topic to policy, Todd insisted “What was the motive to have this ridiculous litigation of crowd size?” Conway did not answer this question but rather blurted out that calling out the president and his administration for their ridiculous claims was not Chuck Todd’s job. He followed up insisting she answer the question. To this she might have given one of the most absurd answers ever heard by a member of Trump’s administration: “Think about what you just said to your viewers. That’s why we feel compelled to go out and clear the air and put alternative facts out there.” Both Trump and Spicer later on complained about the comparison photographs of Obama’s inauguration and Trump’s, at the CIA headquarters and the White House briefing room, respectively. According to CNN, Trump was enraged at the photographs (Bradner, 2017).
It is good news that the Trump administration is not as skilled at skewing public opinion as the Putin administration. It is scary that they are continuing to attempt to lie to the public in order to follow the path of global warming denial and increasing inequalities in the world.

Russian meddling in 2016 US presidential election.

A current Russian leader has used fake news to get what he wants: Vladimir Putin. There is a Russian Internet Research Agency (IRA) with a Department of Provocations whose mission states: “how do we create news items to achieve our goals”. Putin’s personal chef, who spent nine years in prison for fraud and robbery before being hired by the Kremlin, is said to be the main investor in the Russian IRA. The chef, Yevgeny Prigozhin, is the owner of Concord Management and Consulting and has been investigated by the US Treasury Department several times (Lardieri, 2017). The fact that there is a Department that creates news stories based on the Kremlin’s needs and desires is proof in of itself that fake news is a tool used by the Russian government. It is essentially a tool of Russian propaganda. Today, however, this propaganda can be spread quickly all over the world with Internet and social media. Russia’s propaganda machinery is increasingly sophisticated and powerful. It includes thousands of botnets, human “trolls” and networks of websites and social media accounts (Lardieri, 2017).

During the 2016 US presidential election and campaigns, Russian hackers and trolls created fake American Facebook and Twitter accounts to try to influence the election in Trump’s favor (Shane, 2017). A fake Facebook account was created which portrayed an American man in its picture (stolen from a Brazilian’s man account), named Melvin Redick who claimed to be from Harrisburg, Pennsylvania. On June 8th 2016, the account posted “these guys show hidden truths about Hillary Clinton, George Soros and other leaders of the US. Visit #DCLeaks website. It’s really interesting!” This was one of the first public signs that there was foreign intervention in American elections and democracy (Shane, 2017).


Cybersecurity firms are trying to figure out what mechanisms these Russian hackers used on Facebook and Twitter to spread anti-Clinton messages. Even the New York Times is leading an investigation on the subject. Both Facebook and Twitter said they are trying to prevent what happened in the 2016 US presidential race from happening in upcoming elections. Facebook says it takes down a million accounts per day including ones that posted about French and German elections. However, according to former FBI agent Clinton Watts, Twitter has not done much in way of preventing fake accounts and fake hashtag trends and as a result “bots have only spread since the election” (Shane, 2017).

USSR's use of fake news

On July 17th 1983, a small pro-Soviet newspaper in India published an article stating that AIDS was a mystery disease that was going to invade India. The article claimed that the CIA was experimenting with new, unknown biological weapons and things got out of hand, creating this disease. Later, the article was used as a source in much followed Soviet newspaper Literaturnaya Gazeta. From there, it spread to many news outlets across the world, and by April 1987, the story had been published in over 50 countries (Taylor, 2016). 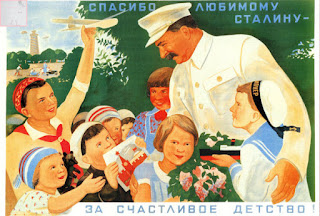 The Soviet Union governments, particularly following Lenin’s rule, were notorious for faking stories in order for their dirty, behind-the-scenes work to go unnoticed. They did not call it “fake news” however, they chose “disinformation” which stems from a Russian word. They killed millions of people quasi-secretly, because they were experts at meddling with public opinion through the media and keeping people focused on other issues. One of the most tyrannical and powerful leaders in Soviet History, Joseph Stalin, used fake news as a weapon of control over his people. He was always portrayed in a suit, and appearing to be continuously working on “making the country progress” even in the dead of night, when any “normal” human would be sleeping. He used the news to make himself appear God-like. In the 1936 poster up above, children are seen hugging and showing affection towards Stalin, who’s dressed in a military – or at least patriarchal – outfit. The Russian words on the poster translate as “Thank you beloved Stalin for our happy childhood”. The “happy childhood” refers to the Stalin Soviet programs every young Soviet went through at the time. Those programs are a big reason for the amount of power Stalin had. The poster makes Stalin appear as the sole reason for the happiness of all Soviet kids, and as their overall caregiver, an undoubtedly impossible task for anyone (including Stalin). It looks like all children love and cherish Stalin in an attempt to further marginalize and eliminate critics of the regime and reinforce Stalin’s cult of personality.

WORKS CITED
Ostrovsky, A. (2017). The invention of Russia: the rise of Putin and the age of fake news. New York: Viking.


Taylor, A. (2016, November 26). Before ‘fake news,’ there was Soviet ‘disinformation’. Retrieved November 16, 2017, from https://www.washingtonpost.com/news/worldviews/wp/2016/11/26/before-fake-news-there-was-soviet-disinformation/
Image: Properganderpress. (2017, March 24). Stalin poster of the week 6: viktor govorkov, thank you beloved stalin for our happy childhood, 1936. Retrieved November 16, 2017, from https://properganderpressblog.wordpress.com/2016/12/20/stalin-poster-of-the-week-viktor-govorkov-thank-you-beloved-stalin-for-our-happy-childhood-1936/
Posted by Unknown at 10:14 PM No comments:

The Dangers of Fake News.

Since 2016, since Donald Trump was elected president of the United States, web searches for the phrase “fake news” have shot up (Carson, 2017). Trump’s first, most memorable mention of fake news was during his first speech as president-elect, in which he pointed his finger at CNN journalist Jim Acosta and screamed “you are fake news” while refusing to answer the reporter’s question (Carson, 2017). Fake news is hardly a new idea however. It has been used for political news for a long time. In the 1828 USA presidential election, Andrew Jackson claimed his predecessor John Quincy Adams had brought out an American girl to satisfy the Tsar. In the 1930s Nazi Germany used fake news to perpetuate stereotypes, racism, and discrimination against Jews (Carson, 2017). Propaganda and fake news are very similar in the fact that they both bend the truth to emotionally persuade a group of people of a falsehood.

Now, however, it is much easier to promote falsehoods with the internet and social media. Before, it was nearly impossible because of the materiality of news. It cost a lot of money to produce and distribute newspapers and the ones who did provide society with news were under close scrutiny and control with media laws, on what they published. There were many less news outlets so the content they released could be controlled more easily. Also, building an audience back then was much harder than gaining lots of followers on social media and having them see what you are thinking.


We must find a way to control what is released on social media. Further, there should be a law or a custom that makes it up to every internet and social media user to filter the content they receive by paying close attention to the posts they “like” and “share” as well as the people they “follow”. Social media outlets should not be able to refer to people’s contacts as “friends” or “followers” because that spreads the false idea that people have things in common with their contact list and are chasing the same goal, like the case may be with real friends.

What is fake news?

If you’ve been on social media at any point in the past 18 months, you probably saw the word “fake news” floating around. According to the Cambridge Dictionary it means “false stories that appear to be news, spread on the internet or using other media, usually created to influence political views or as a joke” (Cambridge Dictionary). Contrary to what Donald Trump claimed in an interview with CNN recently, he did not invent the term ‘fake news’ (Cillizza, 2017). References to ‘fake news’ were found in British newspapers from the end of the 19th century: ‘Secretary Brunnell Declares Fake News About His People is Being Telegraphed Over the Country’ is the title of a newspaper article by the Cincinnati Commercial Tribune from June 7th 1890 (Merriam-Webster, 2017). The word ‘fake’ from a “flash” (slang) language meaning ‘counterfeit’ appeared to be used in the 18th century by criminals in England (Cillizza, 2017).
The mention can be found in literature as well. In George Orwell’s 1984, the protagonist Wilson Smith works at the Ministry of Truth for the Party of Big Brother. He falsifies news accounts as a profession. Many people disappear throughout the novel, while news gets falsified and records appear to be clean. Characters in the novel know that the news is distant from reality but they do not remember any time when it has been different in their past. Language defines thought: people’s memory runs out and there is no real news account to remind them of the horrors their government is responsible for (Wordpress, 2017). That way, the government controls them and can keep profiting. Governments throughout history have used fake news to dull their people so as to go along as they please, often massively profiting from their nation’s workers. After talking about the dangers of fake news I’ll examine cases of governments using it for their personal gain.